Hello from my writing tower! I’ve been a hermit for the last few months, making few social media appearances while I focused on finishing the second and last book of the Chronicles Of A Dancing Heart duet. I am thrilled to announce that the sequel to Wicked Dance is now complete and in the hands of my editor at The Wild Rose Press.

This book took me longer to complete than I expected. I needed it to feel right, and unfortunately, that sometimes means waiting for the muse(s) to talk. So to my loyal readers who have been waiting forever for the conclusion of this love story, thank you for sticking it out with me.

I poured my heart into this book. Sara and Tom wrecked me. Beyond wrecked me if I’m being honest. I borrow a lot from life, whether it’s from events that directly impacted me, or things I lived through people around me, I tap into those experiences to breathe life into my characters.

They feel very real to me because I live in their skin. Tom and Sara are imperfect people. They make mistakes and bad decisions like all of us at some point in our lives. When our heads and hearts are at odds, often times we end up doing and saying the wrong things. Sometimes we recover, other times, we live with regrets.

Theirs is a hard-earned HEA, but I believe having to fight for your happiness is the best way to truly appreciate what matters the most in our lives.

I seriously cannot wait for you guys to read this book. And hopefully, you will not have to wait too long.

A few days ago I received an email that literally made me squeal. The Ripped Bodice, the only exclusively romance bookstore in America, informed me Wicked Dance would be joining their shelves.

While my book has been out in the world since October 2017, and readers have been able to purchase print copies, there is something particularly special about having your book up on a real shelf. Especially, at a bookstore like The Ripped Bodice.

I am so happy and honored to have my book housed at this amazing store and I only hope to be able to visit them soon and meet the owners, Bea and Leah Koch.

So, if you are in the Culver City area, stop at The Ripped Bodice and check out their books! And if you happen to spot my book, take a selfie with it and tag me on Facebook or Instagram!

It’s been a while since I posted about books I’m reading. That’s partly because I’ve been busy working on the sequel to Wicked Dance … AND because I’ve been picking up books and not finishing them. I know, I hate DNFing books, but I just don’t have the time to put myself through the torture of reading through something I can’t connect with. I need the “feels” or it’s just not worth it. I also don’t think it’s fair to name those books. I don’t believe in giving a bad a review, so let’s just leave it at that.

Thankfully, I’ve finally found the book to get me out of my reading slump. KG Fletcher’s Georgia Clay is everything I’d been hoping for. I just started the book two days ago and so far I’ve struggled to put it down. This is the first book in her standalone Southern Promises series, and it’s positively beautiful. Katie and Clay reacquaint at their ten year high school reunion and sparks begin to fly. It’s such a relatable book and the characters are so well written it’s easy to fall in love with them. I can’t wait for her second book in the series, Georgia On My Mind, releasing June 11th!  Go check her out!

Hi guys, I’m excited to announce that the Wicked Dance eBook is now ON SALE for $2.99!!! Get it while you can! This is a special price and won’t last long.

Also, the audiobook is now LIVE!

Narrated by Vanessa Moyen, Sara and Tom come to life in this amazing production. And to help celebrate, I am giving away two free copies! To enter, all you have to do is sign up for my newsletter. Click here to subscribe.

Don’t have Audible yet?

Click here to get the Wicked Dance audiobook for free when you sign up for a 30-day free trial of Audible! 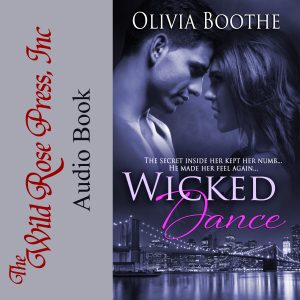 I’ve been so busy lately, I was worried I would not have the time to read Sarah J. Maas’s new installment in her ACOTAR series, but … Audible to the rescue!

I can’t begin to explain how happy I am to have discovered my love of audiobooks about a year ago. It’s become a life saver in terms of helping me get through my TBR list. I get to listen to my favorite books on my commute to and from work. Traffic has become something I look forward to now!

If you haven’t given audiobooks a chance, what are you waiting for?

So far I am on chapter 7, but I will be back to finish my review. Should be fun as I will be in full blown

Gotta click them all! April 27th – 14 FREE e-books.
Some have angst. Some are dark. ALL are so steamy-hot they might melt your e-reader!
Please feel free to share 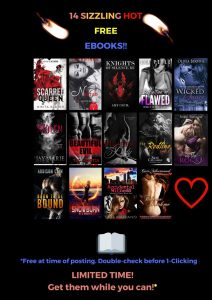 Finished Demon Crown, the 13th book in the Sigma Force series by James Rollins, and all I can say is WOW. Simply bone-chilling. Possibly one of the best in the series. What I love about this series is that James always finds a way to keep the story fresh and entertaining, even after more than 10 books. The science and history that he weaves into each book is unlike anything I’ve ever read. Fascinating. Add the element of suspense and adventure and what you have is an epic thriller that takes you on the roller coaster ride of your life. Beware: If you’ve got some type of insect phobia, this book might give you nightmares. My skin is still prickly with goosebumps.

Outstanding! Pierce Brown has done it again! Five Stars for Iron Gold— the much anticipated first book of a new trilogy which continues the story of his Red Rising series. Iron Gold picks up ten years after the events of Morning Star, with Darrow “The Reaper” of Lykos and Virginia “Mustang” au Augustus leading the new Solar Republic.

I was one of the lucky fans who received an ARC of his latest novel and I couldn’t be more thrilled at the opportunity to be one of the first readers to set eyes on these pages.

For those us who are still reeling from the high octane, action packed rollercoaster ride of Morning Star, the start of Iron Gold will feel like a much needed relief from all the adrenaline. While for fans it has only been a couple of years since the conclusion of Morning Star, for our heroes it has been ten years since their victory over the Society. A lot has happened, and the author is patient in reintroducing us to this world and the events that transpired.

In addition to reacquainting us with some of our favorite Howlers, Peirce presents us with a whole new slew of characters to love … and others you will love to hate. We are also now seeing this world through three more set of eyes—those of Lyria, Ephraim, and Lysander. It’s a fresh perspective to this universe that until now we’ve only experienced through the eyes of Darrow.

The added point of views allow us to appreciate the Red Rising world in a way that expands our view of both the Society and the Republic. They say history is written by the victors, so what if you could see the world through the eyes of those who lost? Even more, what if you could see the world through those who were part of the collateral damage? I found myself conflicted at times, wondering if I had been too caught up in the Reaper’s glory to see the flaws and potential repercussions of his actions. Too enamored by my favorite character (Yes…Sevro) and too high on my personal vendetta against the villains in the story to think back on all the other lives that were also lost but never mentioned.

Then I wondered, aren’t the best heroes those who are flawed, those who have to battle their demons and make the sacrifices that many of us wouldn’t be ready to make? And, shouldn’t that be enough for redemption? Or should the heroes be held accountable for their mistakes, regardless of the price they’ve already paid? Regardless of our love for them?

Walking in Lyria’s, Ephraim’s, and Lysander’s shoes made me contemplate the reality of war. It is not just about destroying a villain and tearing down a corrupt institution, it’s about healing and rebuilding. It’s about leaving a place better than we found it. But what if that’s not enough for someone who lost everything in the name of the greater good? What if your ghosts literally come back to haunt you?

Well, don’t get too comfortable in your chair because before you are done philosophizing about this incredible universe, in the words of Sevro au Barca, “S*it escalates” and very quickly. Core to Rim, you’ll fall in an Iron Rain, experience genocide, get captured, take part in an Ocean’s Eleven type heist, participate in a nerve wracking prison break, and go on a potential suicide mission that will leave you breathless. Darrow’s motley crew of Howlers will have you jumping into a StarShell, diving into oceans, and traveling to different planets, and pretty much partaking in their usual death defying antics before you can finish your burner.

Everything you’ve loved about Pierce Brown and his masterful storytelling comes together in a novel that will have you sitting at the edge of your seat, reading until the late hours of the night and into the dawn. Your gut will wrench, your heart will break, and your mind will be blown.

Get your razors ready, Howlers! This ride is just beginning.